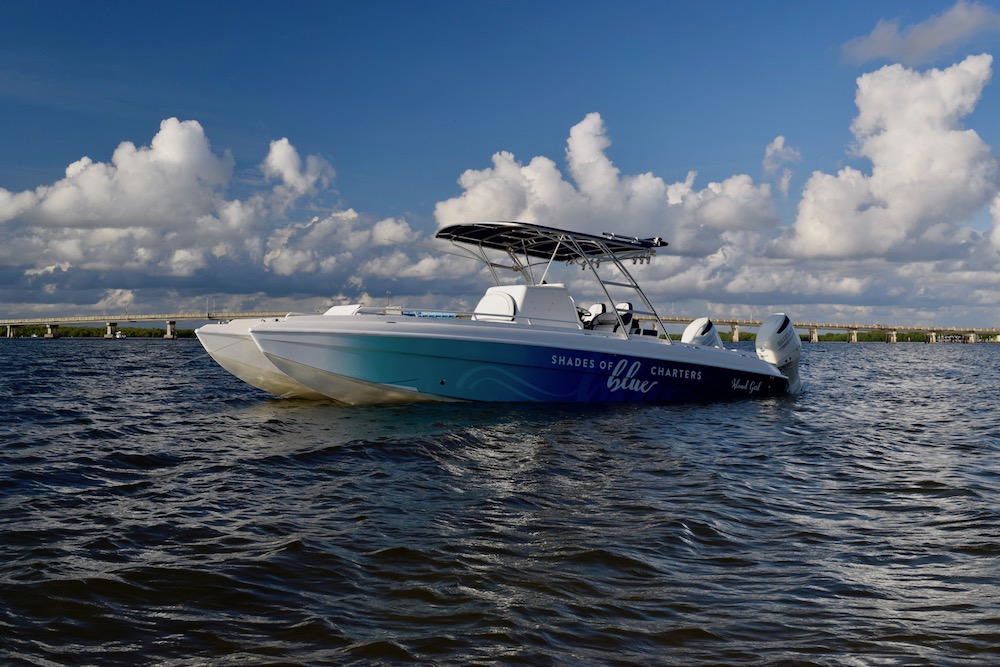 A couple of weeks ago, we flew down to Fort Myers, FL for 3-4 days of sea trials on Island Girl. Because the fuel in the tanks was over a year old, there was some water in the fuel and we got off to a rough start. (Water in boat fuel tanks is a "normal" thing.) Anyway, once we sorted all of that out, we spent the rest of our time running Island Girl and testing all of the new systems on the boat. She ran fantastic! The motors are quiet and really efficient. The new seats came out awesome. The 2000 watt stereo system sounds terrific. We have 4 different speaker zones that are individually controllable, so tons of flexibility. Guests will be able to connect to a private WiFi network so they can listen to their own playlist. We tested the new power steering, the anchor windlass, the freshwater rinse down system, and the retractable shade over the entire rear deck of the boat. We also did some testing of the built in coolers; our beers stayed really cold so, yes, they work just fine. Besides testing all of the new systems on the boat, we also had a goal of putting 20 hours on the new engines so we could get through the break-in period and have the first scheduled maintenance done before we shipped her to St Thomas. (20 hours is a long time, by the way.) We initially wanted to run down to Key West for lunch, but the marine forecast on the Gulf  wasn't favorable for a long journey such as that. We ran in and around Fort Myers, Sanibel and Captiva Islands and even made a run up to Cabbage Key for lunch.

There were a few small issues that needed to be addressed, so when we left, we handed the list to the great folks at Twin Screws Marine Service and went to the airport for our trip home. 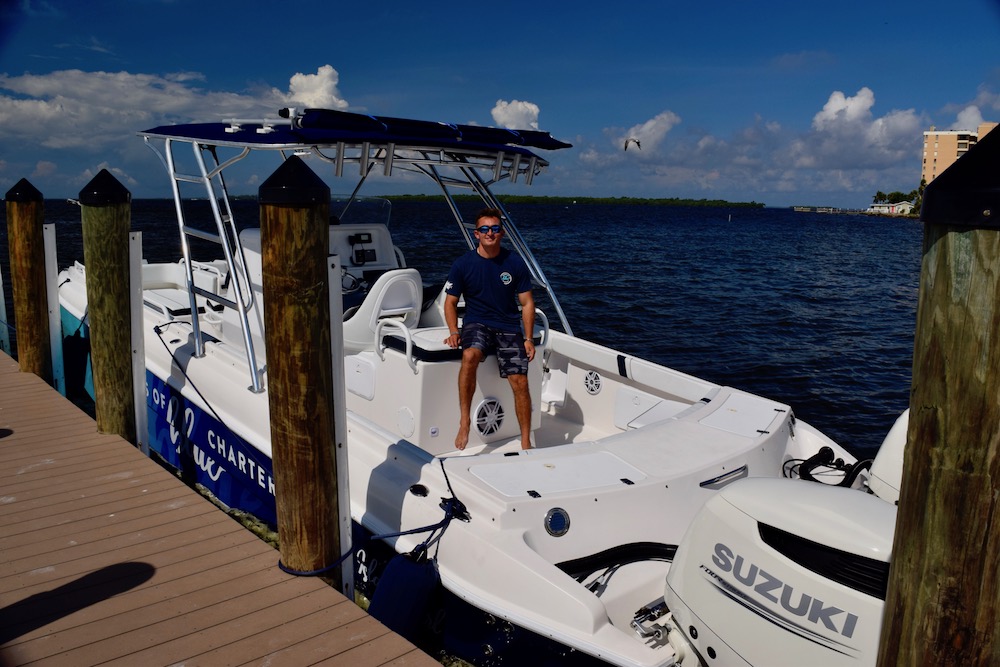 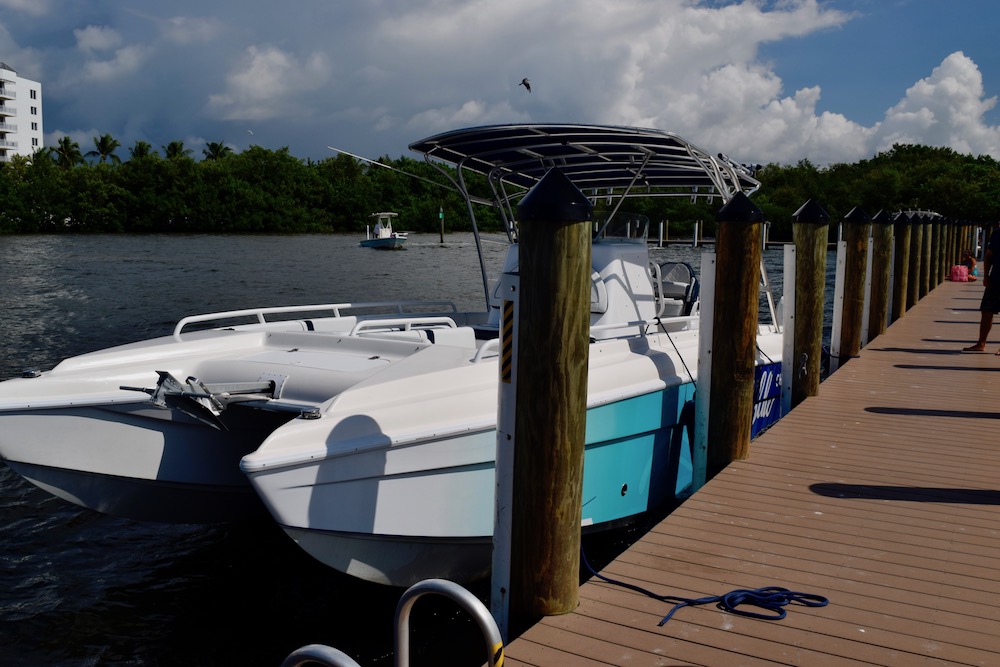 This past weekend, I flew down to Florida so we could move Island Girl from the Fort Myers area to Port Everglades in preparation for shipment to St Thomas later this week.

We decided to take the shorter, inland route which involved transiting the Okeechobee Waterway through the middle of the state and Lake Okeechobee and the Intracoastal Waterway on the east coast  - approximately 210 miles. Our day started early; we were underway by 7:30am with a goal of being at the first lock by 8am. (There are 5 locks on the route and they are used to control the water height on the waterway and the flow of water from Lake Okeechobee.) It takes anywhere from 15-20 minutes to an hour to go through a lock. You communicate with the lock tender via VHF radio - he calls the shots. When it's time to enter, the light turns green, the gates open and you enter the "chamber". After putting fenders out, you pull the boat alongside the concrete wall and grab hold of the lines that are dangling over the side. Once all of the boats are in the chamber, the gates close again and the lock tender either raises or lowers the water in the chamber to match the height of the water on the other side of the gate. Once the water is at the right height, the gates on the other side open, and you're on your way again. 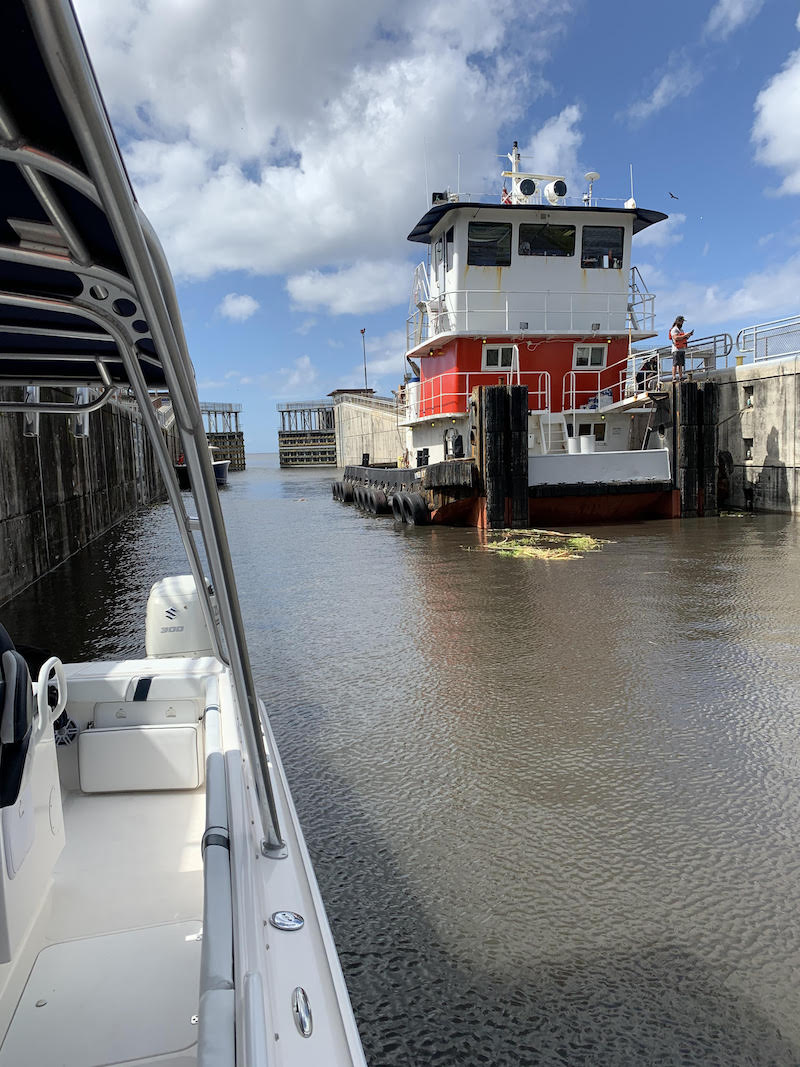 The trip through the middle of the state was beautiful and the flat, calm water gave us an opportunity to let Island Girl stretch her legs! We made great time. 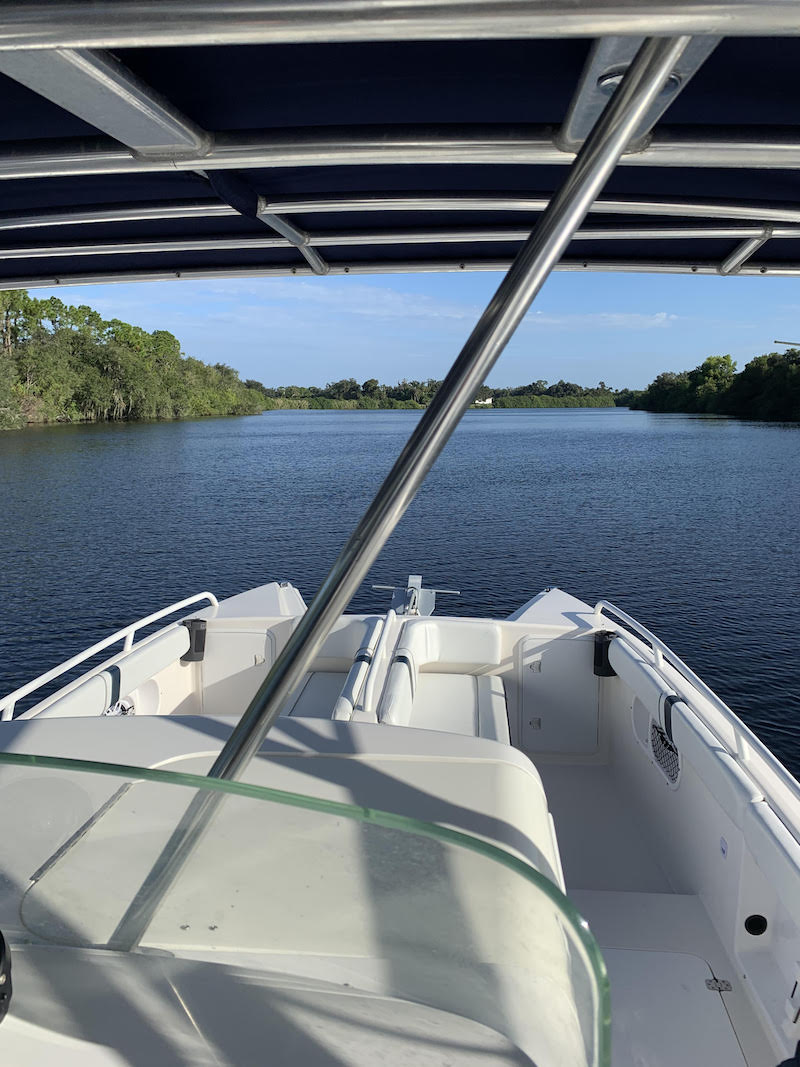 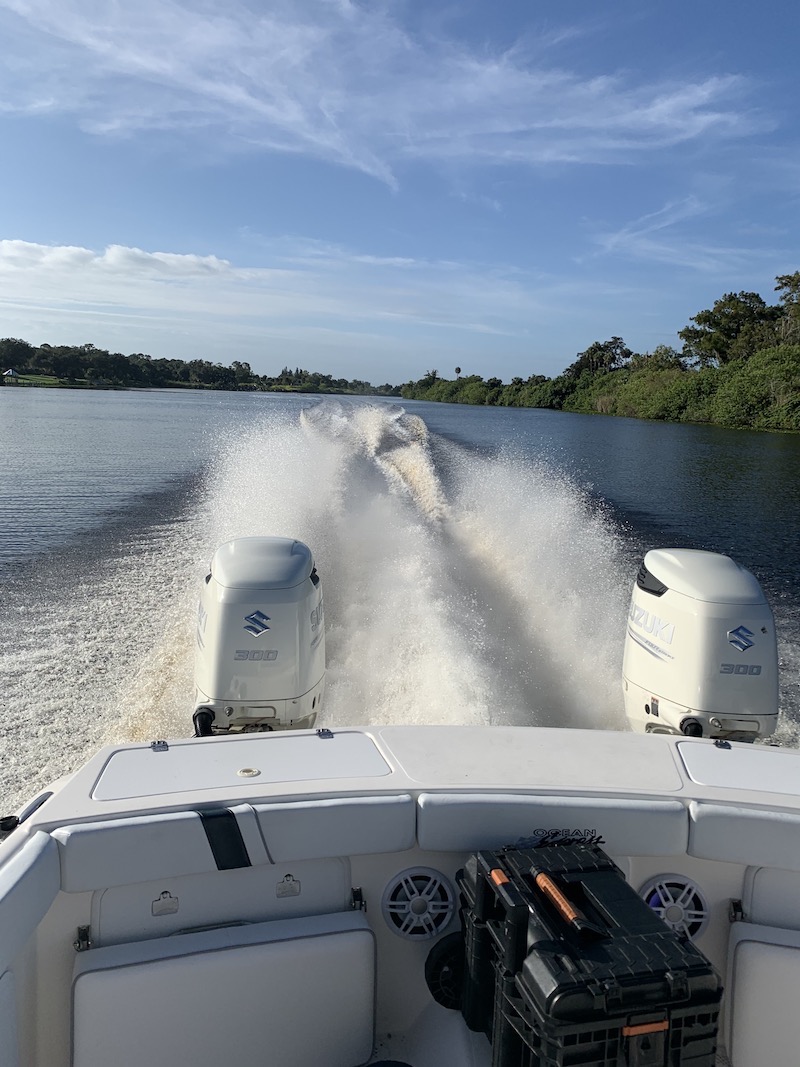 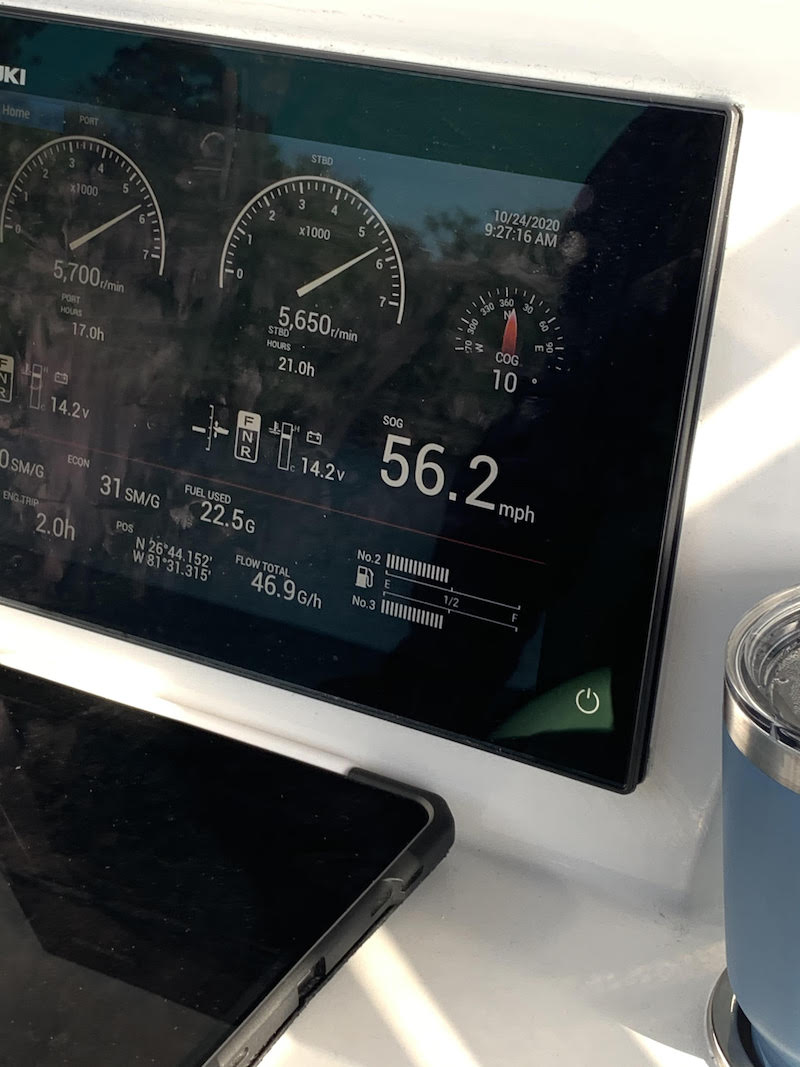 After 3 locks, we entered Lake Okeechobee. Because the water level in the lake was high and because Island Girl doesn't draw much water, we cut straight across the lake (instead of the longer route the bigger boats take) and shaved 30 miles and at least 45 minutes off our journey. We then made our way through 2 more locks and entered the St. Lucie river and eventually the ICW on the east coast for the 80 mile journey to Port Everglades. The ICW was calmer than the Atlantic so it made for a smoother ride, but it wasn't without its challenges. There were numerous no wake and "Manatee" zones which forced us to go slow and often for extended distances. There was a LOT of boat traffic as compared to the occasional fisherman we saw making our way through the Okeechobee Waterway. There were a handful of low bridges requiring us to request and often wait for a bridge opening. Then there were the rain squalls and thunderstorms which added to the fun. We finished the last few hours of our journey in the dark with our running lights on. We pulled in to a marina close to Port Everglades where we had a slip reserved a little after 9pm. We buttoned up the boat, gave the keys to the security guard and headed to the airport where we picked up our rental car for the long ride back to Fort Myers. Our day ended at around 12:45am.

Island Girl will be loaded on a freighter later this week with an expected arrival in St Thomas somewhere around November 6-8. Fingers crossed for a safe and uneventful journey. 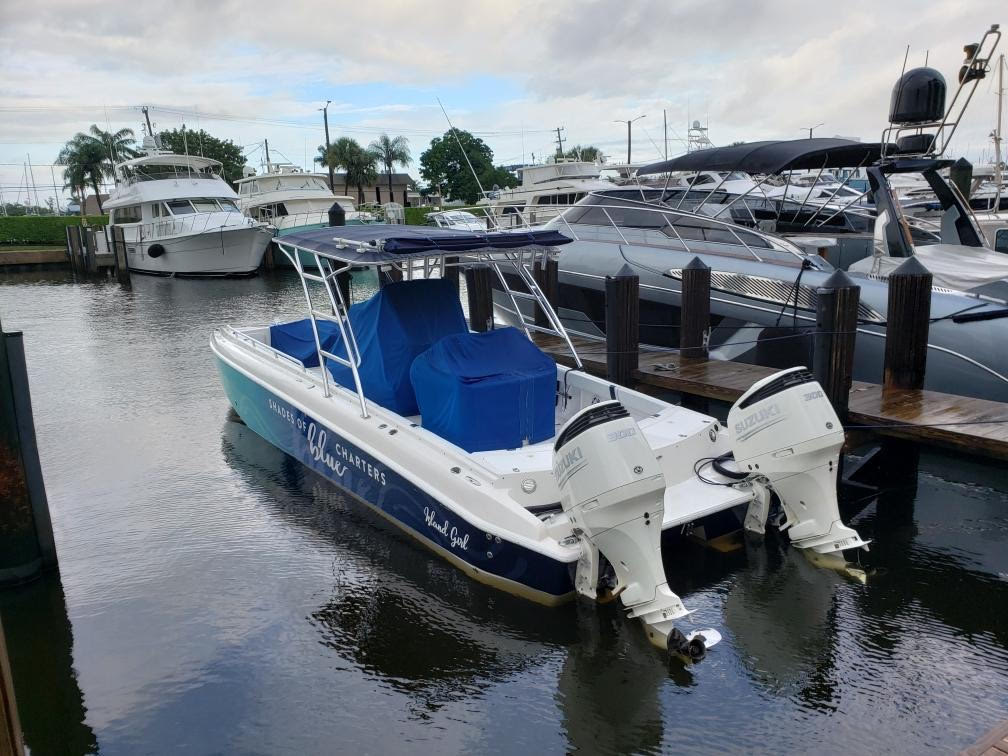